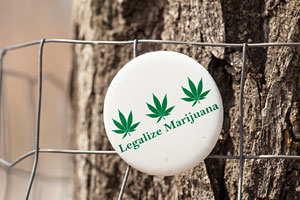 Welcome to the latest edition of NORML’s Weekly Legislative Roundup!

History has been made at the federal level this week! President Donald Trump signed The Farm Bill into law on Thursday that includes language lifting the United States’ decades-long prohibition on domestic, commercial hemp production. Specifically, the 2018 Act amends the federal Controlled Substances Act of 1970 so that hemp plants containing no more than 0.3 percent THC are no longer classified as a schedule I controlled substance under federal law.

On the other hand, Judiciary Committee Chairman Senator Chuck Grassley (R-IA) blocked lawmakers from considering an amendment on the floor of the U.S. Senate that sought to permanently remove the threat of federal intervention in states that regulate marijuana sales.

At the state level, Vermont’s Marijuana Advisory Commission delivered its final report to Governor Scott, which outlines recommendations on how a legal adult use market should be implemented. Recommendations include a 26% tax on cannabis sales, and that a consistent way to test for impairment among drivers is needed before the state moves forward.

Following are the bills that we’ve tracked this week and as always, check http://norml.org/act for legislation pending in your state.

Don’t forget to sign up for our email list and we will keep you posted as these bills and more move through your home state legislature and at the federal level. Another great way to stay up to date is Marijuana Moment’s daily newsletter, which you can subscribe to here.

Penalize States that Maintain Criminalization: The Marijuana Justice Act would (1) remove marijuana from the US Controlled Substances Act, thereby ending the federal criminalization of cannabis; (2) incentivize states to mitigate existing and ongoing racial disparities in state-level marijuana arrests; (3) expunge federal convictions specific to marijuana possession; (4) allow individuals currently serving time in federal prison for marijuana-related violations to petition the court for resentencing; (5) and create a community reinvestment fund to invest in communities most impacted by the failed War on Drugs.

Legislation has been pre-filed by Senator Tallian (D), Senate Bill 213, to allow adults to possess up to two ounces of marijuana.

IN resident? Click here to email your lawmakers in support of depenalization

State Senator Karen Tallian also plans to introduce a bill in 2019 that would allow qualified patients to use and possess physician-authorized medical marijuana.

The measure would impose a civil penalty of $200 for the possession of up to one ounce of marijuana, as well as for the cultivation of up to two marijuana plants.

ND resident? Click here to email your lawmakers in support of decriminalization

Legislation is pending, H. 3276, to decriminalize the possession of certain controlled substances, including marijuana.

The measure would impose a civil penalty for the possession of up to one ounce of marijuana, resulting in a fine only, between $100-$200 for the first offense, and between $200-$1,000 for the second offense.

SC resident? Click here to email your lawmakers in support of decriminalization

Legislation has been pre-filed to permit physician-authorized access to medical marijuana for qualified patients.

A separate measure, H. 3081: The Medical Use of Marijuana Act, also seeks to regulate medical cannabis distribution and access, but does not permit patients to home-cultivate the plant.

Other Actions to Take

Two pieces of legislation are pending that would allow Missourians with certain prior cannabis convictions to get their records expunged.

House Bill 292 requires the court to expunge the records for those previously convicted of the possession of up to 35 grams of marijuana possession.

House Bill 341 would allow registered medical marijuana patients to have their records expunged if they were convicted of a possession offense that occurred prior to their participation in the state’s cannabis access program.

MO resident? Click here to email your lawmakers in support of expungement

The measure would prohibit employers from discriminating against employees who legally consume marijuana off-the-job in accordance with state law.

OR resident? Click here to email your lawmakers in support of employment protections for consumers

Legislation has been pre-filed, HB 33, to permit physicians to recommend cannabis therapy to those struggling with opioid abuse or dependence.

MD resident? Click here to email your lawmakers in support of cannabis as an alternative to opioids

Delegate Chris Hurst has filed HB 1720, which seeks to permit any student who is a registered Virginia medical cannabis patient to possess and use Virginia-allowed medical cannabis oil on school property, on a school bus, or at a school-sponsored activity.

If passed, this bill would prohibit a school board from suspending or expelling from school attendance any such student who possesses or uses Virginia-allowed medical cannabis oil on school property, on a school bus, or at a school-sponsored activity.

VA resident? Click here to email your lawmakers in support of protections for student patients

That’s all for this week, happy holidays everyone!