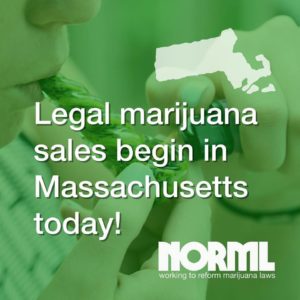 Citizens of the Bay State have much to be thankful for this week.

On November 20th, just two days before Thanksgiving, adults over the age of 21 were able to legally purchase marijuana in the state of Massachusetts for the first time in over a century.

Massachusetts was the first state to enact marijuana prohibition — doing so on April 29th, 1911. Voters decided in favor of repealing the ban in November 2016.

“This signal to open retail marijuana establishments marks a major milestone for voters who approved legal, adult-use cannabis in our state,” Commission Chairman Steven J. Hoffman told Cannabis Now. “To get here, licensees underwent thorough background checks, passed multiple inspections and had their products tested, all to ensure public health and safety as this new industry gets up and running. As patrons look forward to visiting Massachusetts stores, we hope they will do their part by first familiarizing themselves with the law and understanding what is required of responsible consumers.”

On the very same day, Representative Joe Kennedy III — who had historically been one of Congress’ leading marijuana prohibitionist — published an op-ed documenting his evolution of thinking when it comes to cannabis and announcing his new position of supporting reform.

Kennedy writes, “Given the rapid pace of state-level legalization and liberalization, I believe we must implement strong, clear, and fair federal guidelines. To do that requires us to remove marijuana from the Controlled Substances Act (CSA) and legalize it at the federal level.”