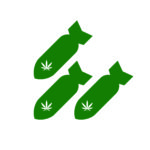 Nothing is perfect, including ideologies. Confronted by imperfections, some ideologues panic. They fanatically defend their own fact-free ideological social identities. Some of the more crazed idealists even launch wars to reach the unreachable reality of their ideal—for example, a drug-free society.

One of the drug war’s ideological lynchpins was ushered into existence during the Reagan era formation of the ONDCP with the help of then-Senator Joe Biden. In addition to Mr. Biden coining the term drug czar, a new and peculiar statutory clause blocked or bottlenecked federal research funding that might prove the government wrong in its declarations of the dangers of schedule I substances. A Controlled Substances Act (CSA) stipulation authorizes, if not encourages, researchers and drug enforcement officials to misrepresent the physical effects of marijuana and other medicinally useful schedule I substances:

Mr. Biden’s ideals encourage governments to publish disinformation about controlled substances—propaganda that can turn deadly. His habit of pandering to drug enforcement will harm his chances in 2020 should the arch drug-war-architect run for president.

In Joe Biden’s 2017 e-book—likely published in anticipation of a presidential run—scanning for the words ‘marijuana’ or ‘cannabis’ produces no results. Much is said instead of his son Beau Biden’s untimely death from brain cancer, and the conventional and experimental, non-cannabinoid drugs Beau received.

The Biden memoir also links illegal drugs to the existence of non-drug crimes. Mr. Biden boasts of how he helped put 100,000 new police officers on the streets and how much it reduced crime. No mention is made of the resultant overcrowded prisons holding drug war convicts, nor the lives of US citizens and internationals wasted in a bloody and pointless conflict targeting the use of benign and useful medicinal substances.

If Democrats aim to give Joe Biden a shot at being president in 2020, they might take a few moments to disable prohibition’s pivotal war propaganda vehicle—the cited schedule I drug research exclusion clause. The CSA language threatens Mr. Biden’s political campaign. The clause is toxic enough to threaten any political entity refusing to abolish it.

A healthier, brighter and more peaceful future is possible as more voters choose to support political candidates and legislators favoring laws assuring truthful drug and chemical information is made freely available to American citizens and the world.