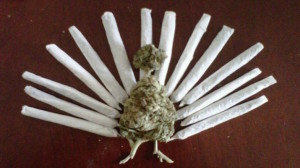 We have much to be thankful for this year. Lawmakers in 22 states have passed legislation to advance cannabis reform, Vermont became the first state to end marijuana prohibition legislatively, the Northern Mariana Islands Commonwealth became the first US territory to pass a regulated marijuana marketplace, and four states approved voter-initiated ballot measures that legalized adult use (Michigan) and medical marijuana (Oklahoma, Utah, and Missouri).

This progress did not come out of nowhere, nor did it come overnight. Our successes are a result of years of diligent organizing and difficult conversations with our fellow citizens about the role of government, law enforcement, and civil liberties in our daily lives.

We need to make sure that we take every opportunity available to further advance the cannabis conversation. The upcoming holidays provide an ideal venue for these conversations.

Look, we know that political arguments are going to happen at the Thanksgiving dinner table, so why not make it about marijuana? While many Americans disagree about other key issues facing our country, there is so much common ground between those who identify as conservatives, liberals, independents, and everyone in-between when it comes to marijuana policy.

So use us as a resource – NORML.org has Factsheets, Talking Points, and you can even pass your phone or computer around the table to have your friends and family contact their lawmakers right then and there to support reform in our Action Center.

Having these tough conversations about the scope of the government’s right to stop, search, and incarcerate individuals for possessing a plant that is objectively safer than alcohol and tobacco, but it’s a hell of a lot more fun than hearing the same story for the millionth time from your cousin or the ranting of your whacky uncle (you know who we’re talking about, but he probably wants to legalize cannabis too).

Since our founding in 1970, NORML has worked to provide a voice in the public policy debate for those Americans who oppose marijuana prohibition and favor an end to the practice of arresting marijuana consumers. We rely on thousands of individuals to fund our movement to continue our critical work. Sign up to be a sustaining supporter or make a one-time Thanksgiving gift to continue our march to progress.

Together, we’re going to make 2019 the best year yet for reform. To make that a reality, we need you to use your voice at the dinner table this week.