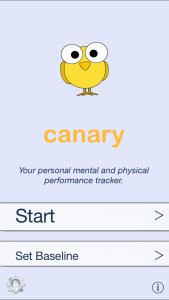 There’s a new app available for iOS and Android called Canary that lets you test whether or not you are in shape to drive. There’s an article about it here (though with some structural problems in the article).

It’s being connected with testing whether you’re too stoned to drive, but in reality it’s a basic test of impairment, whether from marijuana, alcohol, being too tired, or anything else.

I went ahead and downloaded it and have had fun checking it out. The four tests only take a couple minutes and really do seem to be aimed at determining if you are impaired.

First, a series of six numbers wander across the screen and twirl around one at a time. You must remember them and then properly enter the six digit number. You can’t continue until you succeed.

The second test uses the ability of the phone to detect movement. You stand still with one leg extended six inches. The test sees whether you can hold still without weaving.

Third is reaction time. A series of symbols flashes randomly across the screen and there’s one of them that you must touch every time it shows up (without touching the others).

Finally, it asks you to estimate when 20 seconds has passed.

At the end of the tests, it gives you a green, yellow, or red light based on your performance. You can also set a baseline so you can compare results against your own “sober” performance.

Of course, this is essentially the concept behind a normal field sobriety test, which determines whether you can carry out actual tasks that might be necessary to driving, rather than going on some kind of arbitrary measurement of what’s in your blood, breath, or urine that may have nothing to do with impairment.