Back in 2009, Ashley Halsey III, a factually lazy reporter at the Washington Post, was completely taken by the drug czar’s report about the voluntarily testing of drivers and made statements in his article like “11 percent of motorists are high” when the study had specifically stated that it only tested for presence in the blood, not whether they were high. (see How the drug czar uses lazy reporters).

When I brought this undeniable fact to Halsey’s attention, complete with direct quotes from the NHTSA study, he responded to me with this simple nonsensical insult: “Your arrogance and ignorance are impressive.”

Fewer people driving drunk,but drug use on the road is rising

There are fewer drunk drivers on the road, but their place has been taken by people high on marijuana and prescription drugs, according to two reports from the National Highway Traffic Safety Administration.

No. Once again, the NHTSA tested for the “presence” of drugs and specifically noted that marijuana is a problem in this regard because it can stay in the blood for so long, and that it doesn’t indicate whether the driver is “high” or “impaired.”

NHTSA conducted a second study to determine whether smoking marijuana increased the risk of crashes. They found that it did but, adding a caveat, said that pot smoking is most common among a group already at high risk for crashes: young men.

No. The second study did not find that smoking marijuana increased the risk of crashes. They found that, when adjusted for other demographics, marijuana did not result in any statistically significant increase in crash risk.

Lazy and ignorant (willful or not) journalism.

Jacob Sullum also found this article to be an example of bad journalism.

Interestingly, elsewhere in this same paper, that second study is discussed in a way which really reveals how big a story it really is.

Stoned drivers are a lot safer than drunk ones, new federal data show 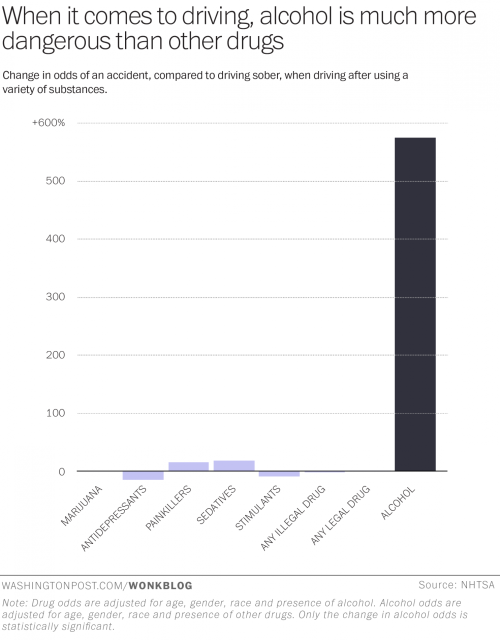 This is the key point. The demonstration that alcohol and driving mix in a way that is radically different than other drugs.

You shouldn’t drive impaired by anything. But as a society, we shouldn’t get distracted by scare stories about roads full of dangerously stoned drivers.

← What a great ad for… weed
Study: Marijuana Use Not Associated With Previously Reported Changes In Brain Morphology →