Drug paraphernalia is one of the truly absurd subplots of the drug war. Its mere existence seemed to infuriate prohibitionists and resulted in a hodge-podge of strange and hard-to-enforce laws.

I remember when Chicago Alderman Robert Fioretti tried to ban small baggies (I also remember him getting really pissed off when I satirized his reasons.)

In some places, little “rose tubes” sold in convenience stores are outlawed because the tubes can be used as crack pipes.

Of course, we all know that Tommy Chong spent time in prison for the crime of making pretty glass art that could be used to smoke pot, and yet apple orchards are left to grow perfectly fine pot pipes without interference.

My favorite line in the drug paraphernalia wars came from a Wilmington Morning Star editorial:

It was as if the massed forces of Eliot Ness had busted one of Al Capone’s speakeasies and confiscated the little umbrellas that went in the tropical cocktails.
…
Fortunately, no officers were harmed in the making of this media event.

Now I had always known that the beautifully designed little McDonald’s coffee-stirrer spoon had been controversial because of its use as drug paraphernalia, but I never heard the whole story until now: The McDonald’s Cocaine Spoon Fiasco 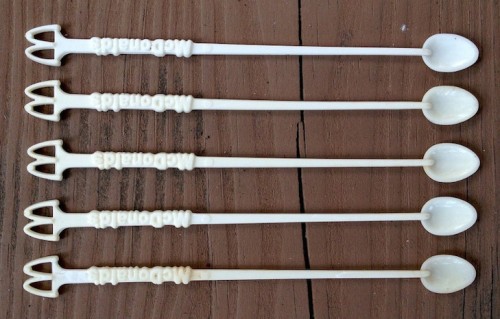 According to minutes from the hearing, one [Paraphernalia Trade Association] representative attempted to make a mockery of the proposed law. “Look at this,” he facetiously told the panel, thrusting a McDonald’s coffee stirring spoon above his head. “This is the best cocaine spoon in town and it’s free with every cup of coffee at McDonalds.”

With its long, thin handle and tiny stirring head, the McDonald’s spoon had, indeed, amassed a cult following among drug dealers and aficionados. Light, cheap, and inconspicuous, it could be concealed easily — and best of all, as its scoop held exactly 100 milligrams of product, it doubled as a measuring device.

While the representative’s intention was to deride the anti-drug crusaders’ attack, his stunt fell on the wrong ears — those belonging to former President of the National Federation of Parents for Drug-Free Youth, Joyce Nalepka. Though Nalepka left the hearing without a chance to testify, she spent her whole drive home “searching for some way to counteract [the PTA’s] McDonald’s spoon statement.”

Then it hit her: she’d contact McDonald’s, inform the company of its utensil’s bad rap on the street, and demand they discontinue it.

And thus, the elegant McDonald’s spoon came to an end.