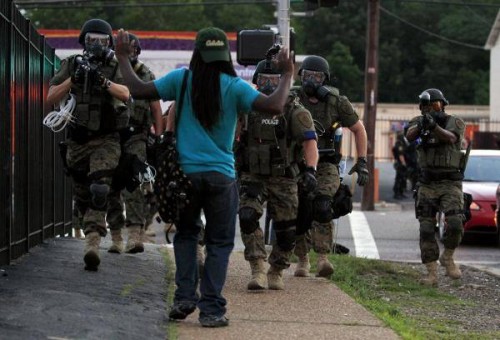 No, there’s no obvious direct connection to drug policy when reading the facts of the case (known to date), yet there’s no way I can, as someone who writes about drug policy, ignore the death of Michael Brown and the resulting military occupancy of the town of Ferguson, Missouri by police forces.

Because the connection is real. The drug war led inexorably to this moment, to the racial applications of the war, to the militarization of police forces, to the sense by many in law enforcement that they are an occupying force surrounded by enemies, to the community disconnect and finally, to the understandable rage that suddenly explodes within communities where a single event becomes a last straw.

#Ferguson is merely a data point. If we don’t do something to reverse our course soon, it’ll turn into a country-wide conflagration. It’s not a desire, but a fact.

Note: Just to be clear, I quote Radley Balko, with whom I strongly agree: “I don’t tolerate threats to kill or harm police officers, public officials, or anyone else. It not only contradicts everything I believe in, it’s also counterproductive to reform. This is the precise sort of crap police officials cite when explaining why they need more power, bigger guns, and more militarization, or when they falsely claim that their jobs are getting more dangerous.”