Shameless plug for the new show this year from The Living Canvas (I am the founder/artistic director).

This year’s show is Living Canvas Rx, and it focuses on drugs. Note, while the show is very definitely about drugs, it’s not about drug policy, so don’t expect it to be an extension of the legalization policy advocacy of this blog – still, the ensemble wrote an amazing show, and I think it’s going to be quite fascinating and entertaining to experience. I am producing and also designing the projections for the show, which opens August 1st at the Den Theatre in Chicago (through August 17). If you’re in the area, check it out! (Full release and details below the fold.) 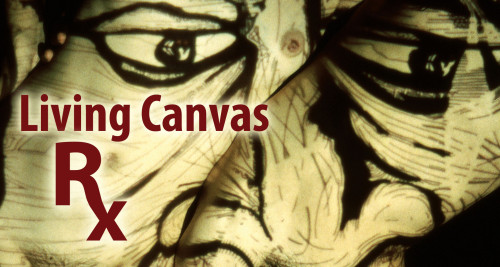 Chicago — The Living Canvas, known for nude actors telling theatrical stories with their bodies clothed in brilliant projections, has a new production this year looking at our obsession with drug journeys — exploratory and necessary, recreational and compulsory, enlightening and entrapping.

Living Canvas Rx gets its name from the symbol for prescription, which originated as an abbreviation of the Late Latin verb recipe, the imperative form of recipere — “to take.” All of us are drug users in some way. If you watch TV, every commercial break mentions at least once to ask your doctor if some medicine is right for you. The radio yammers about free trials and studies. We get fixes from the local drugstore, from basement gardens, or street corner entrepreneurs. We seek things that make us happy — sex, religion, television, chocolate, marijuana, wine, cocaine. What does it mean that this is such a universal search? And what makes one person’s medicine more socially acceptable than another’s?

Every Living Canvas production naturally promotes body acceptance and the expressive power of the body, utilizing unclothed performers who become the textures projected onto them, or are sculpted with stark light and shadow. The use of movement and sound help tell the stories. The performers are both vulnerable and empowered through their nudity, which led to the ensemble’s idea to tell stories about a similar relationship with drugs.

The cast and production team of Living Canvas Rx includes:

Performances of Living Canvas Rx are August 1 through August 17, 2014, Fridays and Saturdays at 7:30 p.m., and Sundays at 6:00 p.m. at the Den Theatre’s Studio 2B, 1333 N. Milwaukee Ave., Chicago. Tickets are $20 each and available at Brown Paper Tickets or at the door. Following each performance is a Q&A with the cast and an optional opportunity for audience members to disrobe and see what it’s like to be a living canvas in the projections.

The Living Canvas celebrates the beauty and expressive power of the human form through performance art and photography, nurturing a sense of body acceptance for performer and audience. It is spectacle and storytelling, utilizing creative lighting, sound, and multi-media imagery that interact with the human canvas.

The Living Canvas is the work of Artistic Director Pete Guither and his associates (The Living Canvas Ensemble). It started with photography of the human form as a canvas for light and projections. In 2001, The Living Canvas branched out to full performance art productions, telling stories by combining the mesmerizing imagery with movement. Though primarily based in Chicago, with 11 unique productions to date since 2001, Living Canvas performances have been seen in such diverse locations as Normal, Illinois and Rochester, New York.