Very interesting video from a local news program interviewing Dennis Flaherty of the Minnesota Peace and Police Officers Association. This is a group that opposes and testifies against any medical marijuana bill in the state and which the Minnesota Governor has said must approve the law.

Flaherty is an outright liar throughout the segment, claiming gateway effect for marijuana, etc.

Where it got interesting was that the reporter actually asked if enforcing illegal marijuana benefitted the police.

Absolutely not. That is a myth and a total… actually very irresponsible that anyone would suggest that law enforcement profits out of marijuana busts.

But just a bit later she got him to say…

Any monies, revenues that may be generated through forfeiture are just used to pay the salaries or getting further tools to focus on the problem.

Uh, yeah. That would be profiting. And she nailed him on it.

This is notable in that a local news station didn’t just let the police officers association control the message, but they actually questioned their motivation. 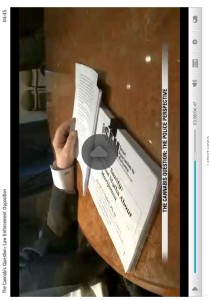 Oh, and by the way… prominently displayed on the desk in front of Flaherty was Kevin Sabet’s SAM manifesto, which Flaherty appeared to be using as a guide to his lies.

← Over 2,000 Texans Protest Unjust Marijuana Laws With DFW NORML
Federal Government To Increase Its Supply Of Marijuana For Clinical Research →