Some of the revelations about the NSA and related programs that spy on American people have revealed that the DEA has used some of that likely illegal intelligence in their operations. The problem with that is that you eventually have to put someone on trial and, according to the Constitution, they’re entitled to know the evidence used against them and the DEA doesn’t want people to know the source of their “intelligence.”

So the DEA has used a system that should be offensive to our form of justice called Parallel Construction, where, after making the arrest, they construct another fake trail of evidence to use in trial.

Documents released through FOIA now reveal that the DEA has another secret method.

This Method is So Constitutional, the DEA Won’t Even Release Its Name

Training documents released to MuckRock user C.J. Ciaramella by the Drug Enforcement Administration provide unprecedented details on the tactic known as “parallel construction,” by which agents reverse engineer evidence to hide surveillance programs from defense teams, prosecutors and a public wary of domestic intelligence practices. But the DEA redacted all references to another, apparently more secretive method of concealing sensitive sources.

Per DEA slides, there are precisely four such methods that are both “workable” and acceptable to the American public. [...]

But the first of these certified, “acceptable” methods is redacted entirely. 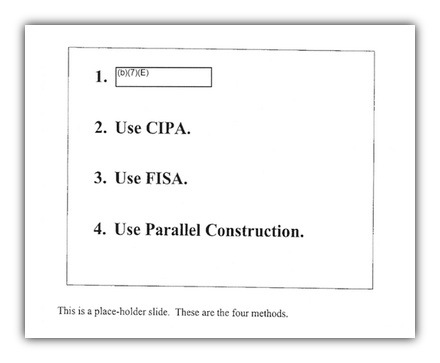 To reiterate, the DEA redacted the name of a method its trainers and legal auditors deemed not only constitutional but also palatable to the public.

As its position on the list suggests, this shielded tactic is “tips and leads paradigm” that is the “primary methodology for protecting [intelligence community] information that is shared with [law enforcement agencies].”

← Slopestyle
Over Half of the States are Considering Marijuana Law Reform – Is Your State One Of Them? →