I almost hate to keep beating this horse…

As you may recall, Mark Kleiman made some ridiculous ad hominem attacks on Jacob Sullum regarding discussion President Obama’s implication in an interview with Jake Tapper of CNN that he couldn’t reschedule marijuana (Sullum merely pointed out that Obama could, and Kleiman yelled at Sullum that rescheduling would have “identically zero” practical effect.)

This exchange continued in Twitter with Mark claiming that Jacob should have written about the question that Mark claims Jake Tapper actually meant to ask (yeah, really!). 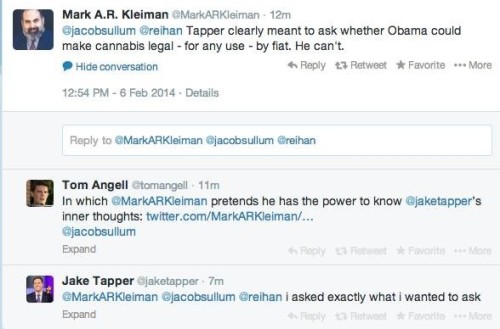 Now Jacob Sullum has come back with an article specifically addressing some of the possible benefits of rescheduling: More Than Zero: Reclassifying Marijuana Would Have a Significant Impact on Drug Policy

Moving marijuana to a less restrictive legal category would have some significant practical effects, perhaps the most important of which would be to advance a more honest discussion of marijuana’s hazards and benefits. [...]

Rescheduling marijuana would not affect the legal status of state-licensed cannabusinesses in states such as Colorado and Washington, which would still be criminal enterprises in the eyes of the federal government. But Gieringer notes that rescheduling could remove one of the major financial challenges facing state-legal marijuana suppliers: Section 280E of the Internal Revenue Code prohibits the deduction of business expenses related to “trafficking in controlled substances,” but only for drugs on Schedule I or II. If marijuana were moved to, say, Schedule III, that prohibition would no longer apply. [...]

But even moving marijuana down one level, from Schedule I to Schedule II, could have an important impact on the drug policy debate. For one thing, it would free the Office of National Drug Control Policy (ONDCP), which is required by law to oppose the legalization of any Schedule I substance, to talk about the hazards of marijuana a little more honestly. Such freedom is desperately needed, to judge by the effort required to extract the concession that marijuana is safer than alcohol from ONDCP Deputy Director Michael Botticelli at a congressional hearing this week. [...]

Since Congress banned marijuana in 1937, says Houston, “we have seen extremely cynical efforts to overblow the danger of marijuana and to demonize it. A move to reschedule or unschedule would be the first time since 1937 that our government started to roll back some of that reefer madness.”

The best solution, of course, is to completely deschedule cannabis and that would require Congress to do something. But the President could and should (given this administration’s claims to care about science) do the right thing and at least reschedule. The impact would certainly be more than identically zero.