POTUS: Impaired drivers involved in nearly 1/3 of all deaths from motor vehicle crashes in the U.S., taking almost 30 lives each day.

Here is the actual Presidential Proclamation naming December as National Impaired-Driving Prevention Month. Note the same wording. Rafael’s quote of it would seem to indicate its importance in the document (perhaps he wrote it for the Prez).

Impaired drivers are involved in nearly one-third of all deaths from motor vehicle crashes in the United States, taking almost 30 lives each day.

It seems to me that the average citizen, seeing that passage, would take it as reading that impaired drivers (including a variety of impairments such as alcohol and other drugs) were responsible for 30 deaths daily.

But it’s not true.

It’s quite likely that the referenced statistic comes from this governmental report (or a similar one): CDC – Impaired Driving Facts

Every day, almost 30 people in the United States die in motor vehicle crashes that involve an alcohol-impaired driver. This amounts to one death every 48 minutes.

In 2010, 10,228 people were killed in alcohol-impaired driving crashes, accounting for nearly one-third (31%) of all traffic-related deaths in the United States.

Wait a second! Note the use of the word “alcohol”? That wasn’t in the Presidential Proclamation. Of course not. The Proclamation was about impaired drivers of all kinds (particularly given this government’s attempts to push for harsher laws on cannabis and driving). The statistic was a compelling one, but didn’t fit their agenda, so they dropped the word “alcohol.” Interesting.

It may still be technically accurate, but it’s a lie — an intentional effort to deceive the public in order to bolster their argument

But let’s look a little further.

If you go back to the source information from the NHTSA, you discover that their use of “impaired” is not the english language definition of the word, but rather an arbitrary political/legal definition.

Ah, so it was those drivers who were technically “impaired” by alcohol who caused those 30 deaths each day.

Wait. Not so fast.

The term “alcohol-impaired” does not indicate that a crash or a fatality was caused by alcohol impairment.

Now we’re finally getting a picture of reality, although it’s clearly impossible to know how many people die because of impaired drivers.

This, of course, doesn’t lend itself to a dramatically scary opening to a Presidential Proclamation, but why can’t we talk about having a month to make people aware of not driving impaired… without lying?

This matters for a couple of important reasons:

Kerlikowske does it again in this article: Marijuana’s risk to drivers debated

Research is incomplete on how much marijuana it takes to impair driving. But Gil Kerlikowske, director of the White House Office of National Drug Control Policy, said being even a little intoxicated on marijuana is unacceptable.

And this kind of talk from the federal government emboldens local officials into really pulling the most bizarre stuff out of their ass.

And in Washington, according to Chuck Hayes of the International Association of Chiefs of Police, tests confirming the presence in drivers of THC – marijuana’s active ingredient – have made up 42 percent of the state’s toxicology lab caseload this year, an increase from 26 percent last year.

“I’m not sure the public really understands the danger of it,” said Hayes, a retired Oregon State Police captain who trains police officers to be drug-recognition experts.

What danger? The danger of increased drug testing? ‘Cause that’s all you’ve shown.

Meanwhile, the only reasonable science-based truthful words are coming from reformers:

Marijuana advocates acknowledge that driving under the influence of cannabis is ill-advised. But they argue that law enforcement’s concern is overblown, and point to a 2012 study that concluded the auto accident risk posed by marijuana is on par with antihistamines and penicillin.

But the government isn’t interested in telling the truth. They want to scare people into supporting their agenda. Nothing else matters.

Now, I do a lot of driving and I’m right there in wanting to increase safety on the roads. But I want accurate information and scientific analysis of comparable dangers.

And I think that it’s good to talk about the increased safety we’re already experiencing. Check out this amazing chart: 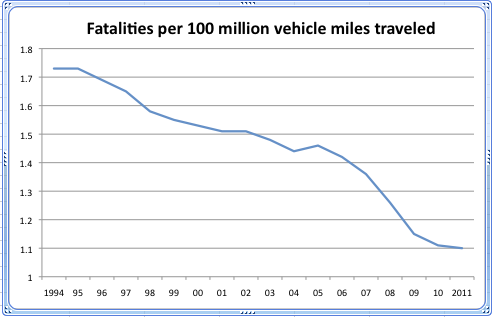 That’s some incredible progress we’ve made, and we should celebrate that. I’m sure it comes from a variety of factors – safer roads, safer cars, better education, and others.

Maybe we can do better. But we’ll do it through science and policy analysis, not through fear-mongering… or lying.

← RAND: grasping for relevancy
Shop for a Cause: Donate to NORML Every Time You Buy →