This has been discussed a fair amount in comments, but I wanted to address it in a regular post.

This Tuesday, September 10, at 2:30 pm Eastern, there will be a hearing in the Senate Judiciary Committee: Conflicts between State and Federal Marijuana Laws

That last name on the list surely provokes a WTF? from a lot of folks. I mean, really. Kevin Sabet? What makes him a relevant witness on the subject of the conflicts between state and federal laws? Nothing. He’s not knowledgeable about the legal or political issues. He’s not an expert on the states involved, and certainly not one on marijuana.

But he’s got a credit of having worked for the ONDCP, is willing to whore himself out whenever marijuana is mentioned (and seems to have unlimited time to do so), and has an opinion that is in relatively short supply these days (that marijuana should remain illegal). He also has the ability to present himself as a sane person, as opposed to a majority of the other prohibitionists out there. I’ve seen Peter Bensinger testify — you expect there to be a nurse handy to change his diaper. Crazies like Betty Sembler and Calvina Faye? Lots of historical baggage. Kevin may be peddling shit, but it’s shit in a suit.

I know there are some who feel that ignoring him is the best approach, but as long as he is interviewed in every mainstream media piece about marijuana, that’s really not an option. Check out this recent piece

Kevin Sabet, who served as an adviser on drug issues to President Obama and former Presidents Clinton and George W. Bush, said the drug czar could serve as “a powerful conduit for the direction of drug policy.”

He said the czar must make sure the nearly dozen federal agencies that deal with drug issues work in sync, but that the position had clear limits and no drug czar could legalize a drug Congress had banned.

“Even if they wanted to, no one in the executive branch could legalize drugs … because the Controlled Substances Act is the law of the land,” Sabet said.

That last statement is an out-and-out lie. In fact, the CSA was set up so that executive branch agencies were the ones to add or remove drugs from the list. Or maybe Kevin actually is that stupid — after all, he’s not interested in the truth — he’s simply going to use anything in his arsenal to make a point.

Recently, Kevin got a major piece in the Christian Science Monitor: 7 big myths about marijuana and legalization. This is essentially a condensed version of his book: “Reefer Sanity: Seven Great Myths About Marijuana 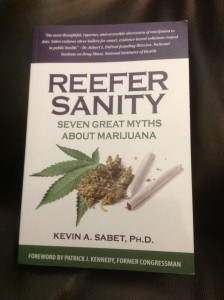 Yes. I have read his book. If I’m going to continue criticizing him, I’ve got to know what he’s saying. I’m certainly not suggesting that anyone else do so, however, because it’s not a pleasant experience.

Here are his seven myths in a nutshell;

2. Smoked or Eaten Marijuana is Medicine. He takes a diferent approach here, but never actually addressing the so-called myth. He doesn’t even attempt to disprove marijuana’s medicinal qualities when smoked or eaten, but rather focuses on a host of things that have nothing to do with the subject.

3. Countless People are Behind Bars Simply for Smoking Marijuana. He starts off with a straw man, then admits that way too many people are negatively affected by marijuan aarrests, etc., thereby proving the “myth” and then randomly and bizarrely suggests that more people will be arrested after legalization.

4. The Legality of Alcohol and Tobacco Strengthen the Case for Legal Marijuana. This is straw man in the way he presents it. It really is an excuse for him to improperly claim that marijuana is the same as alcohol and tobacco and therefore every bad outcome from either of those two in past history should be expected from any form of marijuana legalization.

6. Portugal and Holland Provide Successful Models of Legalization. This is also a straw man, as legalizers know that neither is a case of true legalization, but rather the fact that they have each followed a significant path of depenalization without serious negative consequences is useful information.

7. Prevention, Intervention, and Treatment are Doomed to Fail – So Why Try?. This one’s a complete mess – a combination of straw man, failing to address the so-called “myth” and making the unfounded assumption that marijuana use is a priori “undesirable.”

In his conclusion, he addresses his third way approach with its “no to legalization” and “no to incarceration” approach. The question we always ask is “What about the non-problematic user who doesn’t need treatment?” This appears to be his answer.

“If carried out correctly, however, arrests can serve two good purposes. A smart arrest policy can both provide a societal stamp of disapproval and provide an opportunity to intervene and stop the progression of use. The current policy of simply arresting and fining marijuana users represents a missed opportunity for drug education and intervention.”

So yes, it would appear that Kevin Sabet, by his own arguments, wants to actually increase law enforcement efforts against marijuana.
Some third way.

← The $100,000 NORML Challenge from Rick Steves and Justin Hartfield
Odds and Ends →