Jacob Sullum discusses one of the provisions in the Colorado pot regs: Can Colorado’s Limit on Pot Purchases by Nonresidents Survive Constitutional Challenges?

The marijuana regulation law that Colorado Gov. John Hickenlooper signed last month includes a quarter-ounce limit on pot purchases by visitors from other states. Colorado residents, by contrast, may buy up to an ounce at a time. As I have mentioned before, making the purchase limit hinge on residency seems inconsistent with Amendment 64, the marijuana legalization initiative that is now part of Colorado’s constitution. The quarter-ounce rule may also be vulnerable to challenge under the U.S. Constitution, since it discriminates against residents of other states.

Regardless of the Constitutional questions, one of my first reaction is bemusement that this is such a big deal.

Has anyone driven from Illinois or Iowa into Missouri? As soon as you cross the border, you see things like this: 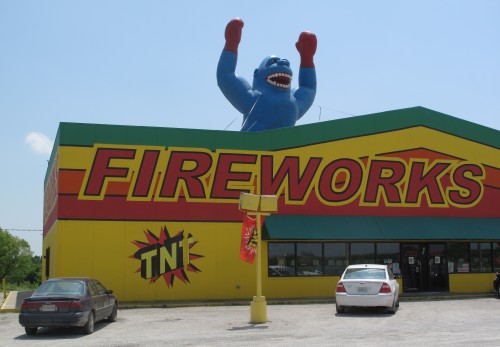 In fact, you’re likely to see five or six of these stores right next to each other just inside the border.

And unlike marijuana, these things can blind you or cause you to lose a finger.