Rafael Lemaitre, Communications Director for the Drug Czar’s office, made this post recently: Drug Laws: Why Do We Have them, and Do They Work?

For an office that claims to want to follow science, they go out of their way to bend not only science to fit their ideology, but language as well.

Here’s how it starts:

Right off the bat, he tries to bend language to his purpose. Let’s be clear here. If they’re outlawing drugs, then these are laws, not regulations. I know the ONDCP doesn’t like talking about “prohibition,” but that’s what these laws are. One of the major points about drug policy reform is that outlawed drugs are not regulated at all, but turned over to the black market to distribute. We want appropriate regulations. The Drug Czar does not.

Let’s go to the data. Here’s what the Nation’s largest, longest-running, and most comprehensive source on the state of drug use in America shows: 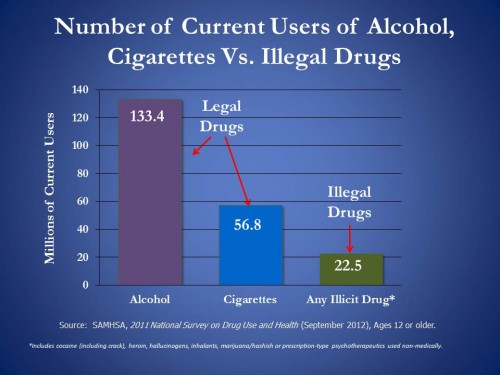 As you can see, the use of legal drugs like alcohol and tobacco far outpaces the use of illegal drugs. It is clear, then, that laws discouraging drug use do have an effect in keeping rates relatively low compared to rates for other drugs that are legal and therefore more available. Even beyond this one-year snapshot, we know that significant progress has been made in the long term. Since 1979, there has been a roughly 30 percent decline in the overall use of illicit drugs in America.

“… laws discouraging drug use…”? Really? So SWAT teams that shoot your dog and your kid are just your way of wagging your finger and saying “tisk, tisk”? Why are you so afraid of the language?

We have done a great job of discouraging tobacco use, through regulation, education, and societal disfavor. That would be an appropriate use of the word “discouraging.”

But of course this chart says absolutely nothing about the effect of laws on the use of different drugs. Science would tell you that there are a host of different factors that can affect usage. And science will also tell you that worldwide, there is very little evidence that increased enforcement of prohibition laws has significant effect on use, and even less evidence that it has a positive effect on abuse (Note, of course, that as part of Lemaitre’s sloppy abuse of language, he seems to see no distinction between use and abuse.)

There is, on the other hand, plenty of scientific evidence to show that increases in drug law enforcement result in an increase in criminal violence, something the Drug Czar’s office isn’t keen to discuss.

So our challenge is not that we’re powerless against the problem of substance use in America.

What problem of substance use? Substance use is not a problem. Or are you claiming that all the people in your chart who drink wine with dinner are a problem to be dealt with? Substance abuse is the problem.

The challenge is that rates of drug use – a behavior that harms too many of our fellow citizens — are still too high.

Again, the rates of drug use are not a problem.

That’s why the President’s National Drug Control Strategy supports innovative and proven programs that aim to reduce drug use and its consequences through a combination of public health and public safety interventions.

And just what are the consequences of responsible drug use?

It boils down to simple arithmetic: The more Americans use drugs, the higher the health, safety, productivity, and criminal justice costs we all have to bear.

That’s not simple arithmetic, it’s not science, and it’s just not true.

And if sensible drug laws (in combination with a wide array of prevention, treatment, and other health interventions, of course) help keep those numbers down, then the answer is yes, they are working.

If we had sensible drug laws, we probably wouldn’t care so much about your dishonesty.