How times have changed. As the new Marijuana Majority site shows, it’s getting easier to find people willing to speak out publicly in favor of ending prohibition in one way or another.

And, at the same time, the prohibitionists are more and more scurrying for cover like cockroaches when the lights come on.

You may remember this bizarre and over-the-top billboard that was put up in Oregon recently: 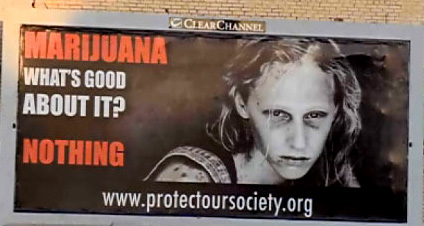 I’m not sure what this woman’s problem is, but it certainly isn’t marijuana.

Well, after only about two weeks, Clear Channel took down all the billboards due to complaints. Here’s what they found:

“The ads protesting marijuana are being removed because our policy is transparency of advertising campaigns and the advertisers who are sponsoring them. These ads include a misleading website that we believe needed to honestly represent the advertiser so the ads are being removed,” he said in a prepared statement. [...]

The boards name protectoursociety.org as a contact, but the website contains no phone number, address or names of members.

The contact phone number listed with Clear Channel for the billboards belongs to St. Petersburg, Fla., group called Save Our Society from Drugs. A spokeswoman there on Friday said they are not affiliated with the advertising and have no information about Protect Our Society.

Interesting. If you look up the registration information for protectoursociety.org (which has the billboard plastered all over its pages), the owner is Calvina Fay and Save Our Society from Drugs.

Umatilla County Sheriff John Trumbo is the spokesman for people opposed to Measure 80 in Oregon, but he told The Oregonian that he doesn’t know anyone with Protect Our Society.

And yet, according to Sam Chapman with the National Cannabis Coalition:

Umatilla County Sheriff John Trumbo lied to The Oregonian last week when he said that he didn’t know anyone affiliated with a group called “Protect Our Society”. Protect Our Society was a Political Action Committee (PAC) that was created for Measure 32, a 2010 initiative which sought to repeal the Oregon Medical Marijuana Act (OMMA).

According to Election records provided by the Oregon Secretary of State, Trumbo was a Chief Petitioner for Protect Our Society which was discontinued on April 10th, 2012.

Now, it could be that the Protectoursociety website is not affiliated with the failed Protect Our Society PAC, but that seems unlikely (especially since Shirley Morgan, the treasurer of the failed PAC, was head of Oregonians Against Legalization of Marijuana, which apparently is connected to Calvina’s group).

Of course, if you follow the trail, somewhere you’ll probably find that it’s our own tax money that’s being used to try to convince us to keep feeding the prohibition beast.