Colorado’s Amendment 64, which aims to regulate marijuana in a manner similar alcohol, is gaining favorability with voters as the November election nears.

New polling data, released over the weekend by DenverPost/SurveyUSA, shows Amendment 64 support growing. 51% of respondents said they would vote in favor of the measure, with only 40% saying they will vote against it. 8% remain undecided.

Previous polling, conducted several weeks ago by Public Policy Polling, had support for the amendment at 47%, opposition at 38%, and 15% undecided. 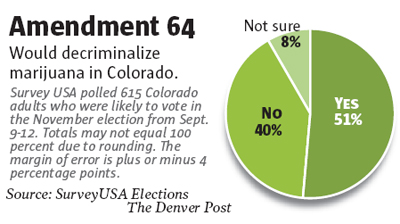