This cracked me up.

The official voters’ guide that was mailed to every household in Massachusetts beginning last week includes a Web address for the No on Question 3 committee, which is urging voters to reject a ballot initiative that would legalize the medical use of marijuana and authorize dispensaries where patients can obtain it.

The address, logically enough, is votenoonquestion3.org, but the committee settled on that name without bothering to register it. Whoops.

On Tuesday a savvy satirist registered the URL, where you can now find Onion-esque items with headlines such as “FACT: Marijuana Is the Gateway Drug to Twinkies,” “FACT: No Marijuana User Has Ever Been Successful” (above a collage of famous pot smokers’ photos), and “Elementary School Counselor Speaks Out Against Medical Marijuana” (quoting Mr. Mackey, the guidance counselor on South Park).

No on Question 3 spokesman (and former ONDCP official) Kevin Sabet told The Boston Globe, “It’s funny and upsetting, I guess, at the same time.” No, it’s just funny.

According to the Boston.com article, they even first blamed medical marijuana supporters for their mistake:

The group sent out a press release saying proponents of medical marijuana were tampering with the democratic process through “underhanded efforts.” But, Sabet said, the committee made a mistake.

Go check out the spoof website. It’s a real blast! 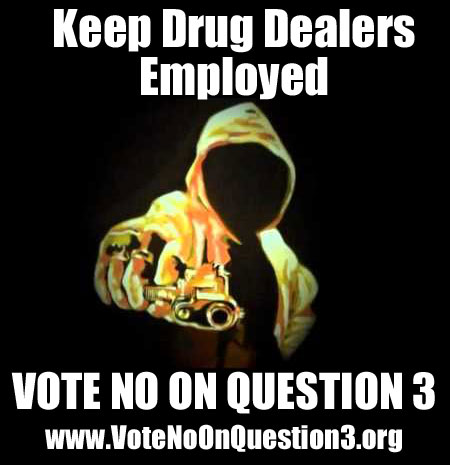 [Note: I really didn't plan on even mentioning Kevin's name for awhile, but he just keeps popping up everywhere as the voice of prohibition.]