Well, we know he’s required by law to lie, but he does it so… enthusiastically.

Mike Riggs has a good piece at Reason: Obama’s Drug Czar Is Lying to You About Drug Courts

He points out a couple of areas where Kerlikowske is either lying, uninformed, or both.

Interestingly, the article also points out one of the real problems with drug courts. Research has shown that drug courts can be effective in terms of cost savings over incarceration if they’re used for high-risk populations. But in practical terms, drug courts cherry-pick those who are put into the program, often selecting participants who have no drug problem to begin with.

This chart shows the breakdown of primary drug in drug court recipients in urban, suburban, and rural areas. 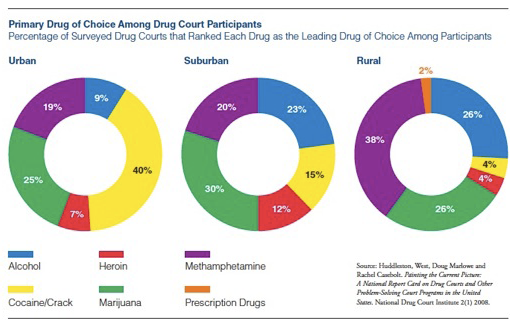 Marijuana is way too large a percentage — but it makes sense since marijuana, as an illicitly-used drug, is a major cash cow for drug courts, for treatment centers, for drug testing companies, and so many more.

From a rent seeking point of view, this practice–called “cherry picking” by the National Association of Criminal Defense Lawyers–makes perfect sense: Federal drug court funding is contingent on keeping participants clean of alcohol and drugs for at least 12 months, and having a lower recidivism rate for drug court graduates. If you’re a first-time drug offender and you’re not addicted, you’re more likely than a hardcore addict to stay clean for the duration of drug court, and less likely to reoffend (or get caught reoffending) once you’ve graduated. That means you help drug courts keep their numbers up, which helps keep them flush with grants.

Here’s a pro tip for journalists covering the drug war, or any other policy issue: Do your homework and then ask real questions. Whether the drug court model is spreading, as The Root interviewer above asks, is not nearly as important as whether it works as advertised. And that’s why journalists need to do homework; because Kerlikowske says they work as advertised, and independent research says they don’t.

← Whither spam?
Scientific Review: “There Is Now Clear Evidence That Cannabinoids Are Useful For The Treatment Of Various Medical Conditions” →