This is part two of my review. Please read part one to see where I talk about some excellent things that are in this book, along with some general problems. Today, I want to take a closer look at one particular small passage.

This is something I've talked about often as a response to those who fear the unknown spike in post-legalization usage (for all currently illicit drugs), and the book addresses it, sort of…

But isn't everyone with an addictive personality already addicted to something?

Sorry, but this argument for legalization is mere wishful thinking. While it's true that people with drug addictions tend to have some personality traits in common, many of those traits (such as secretiveness) tend to develop and become entrenched only after the addictions–as effects, not causes. Certainly there are differences across individuals and population groups in susceptibility to specific addictive behaviors, and some of those differences seem to have a genetic basis. But those are tendencies, not the irrevocable decrees of fate.

The answer fails to address or (perhaps) understand the question.

As the authors note, there are certain people who, due to genetics or due to their “situation” in life, are more susceptible to dependent behaviors. These people don't need legalization for those behaviors to surface. Alcohol is legal and readily available to anyone. Illicit drugs are also far from difficult to obtain. There are very few Americans who haven't had opportunities to partake in some kind of drug, and therefore, the opportunity to feed any latent dependent tendencies.

It is highly unlikely that marijuana legalization, for example, will result in someone with a predisposition to dependency trying drugs for the first time.

Take a look at the same thing from the reverse side. What are the marginal effects of prohibition? Are drug abusers likely to be easily deterred by prohibition? Of course not. The most likely to be deterred are the casual users – the equivalent of wine-with-dinner-and-a-drink-with-friends-after-the-show-Friday-night users. Illegality deters the people who are the least problematic, and has very little effect on the problem users. So when you legalize, you are lifting the deterrence specifically for the least problematic users.

This means that while an increase in post-legalization use may result in some increase in dependency, it would likely be a far, far smaller group.

Let's say, for example, that 10% of those who currently use marijuana have some kind of dependency issues (which, as we know, are very mild with marijuana). The book uses 9%, but 10% will be easier. Now, let's assume that legalization will result in a 50% increase in the number of marijuana users. Clearly, based on the above arguments, there's no way that 10% of that increased group will be abusers. It would be a fraction of that. But let's say, for the purpose of argument, that a full 6% of that increased group will be abusers (way too high, in my opinion, but let's look at it anyway).

See the chart below. The first bar shows that for every 100 users, 10 are dependent (the remainder are labeled “recreational”). The second shows when you increase the number of users by 50% (with 6% of the increased population portion as abusers) that for every 150 users, 13 are dependent. 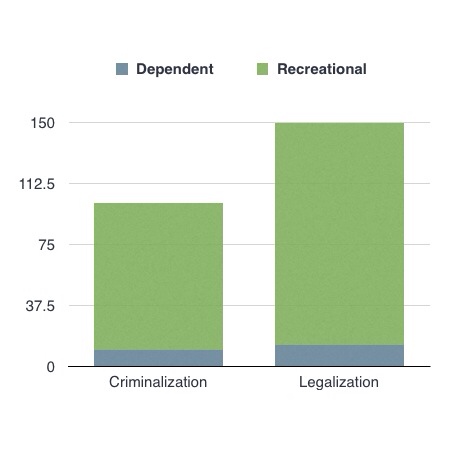 As this graphically demonstrates, even in a pessimistic analysis, even large increases in users post-legalization are unlikely to result in a world full of zombies.

Add to this the fact that post-legalization, all efforts can be directed at helping those who are dependent, as opposed to the prohibition sledge hammer of going after all users. There are benefits to regulated legalization that can actually reduce the number of dependent drug users. We could even theoretically see a net savings. This is critical, as that would undermine the only weak argument left for the paternalistic prohibitionist.

To be fair, the authors of the book (for the most part) do not seem overly concerned about a massive explosion of dependent marijuana users, even while overestimating the numbers. They note that marijuana dependence is significantly milder. But their inflation of likely dependent numbers is very concerning to the overall analysis in the book, and additionally, the marginal effects will be even more important to understand as we get into discussions down the road of legalized and regulated cocaine and heroin.

The author who appears most concerned about increased numbers of marijuana users is Jon Caulkins, who seems to fear an epidemic of damaged children of stoned parents.

I'm not sure where he gets that fear. It's not something you hear much about, except in ridiculous over-the-top ONDCP-funded television commercials.

Yeah, my childhood was horrible. My parents laughed a lot, and they made us listen to jazz and Pink Floyd and then we'd eat ice cream. And we had to go to music festivals…. I don't want to talk about it.

Still to come– I'll talk about the section on marijuana and alcohol.