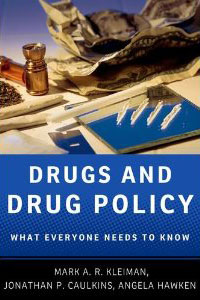 Newly available: “Drugs and Drug Policy: What Everyone Needs to Know” by Mark A.R. Kleiman, Jonathan P. Caulkins, and Angel Hawken, in both paperback

With a bold title like that, I just had to check it out.

And to be perfectly honest, the book essentially lives up to its title. Clocking in at a mere 256 pages, and written in a very easy-to-ready style, the book nonetheless contains an extraordinarily comprehensive overview of drugs and drug policy (the authors define “drugs” for the purpose of the book as “abusable psychoactive drugs.”)

Of course, that supposes that you’re willing to read it all the way through. Despite its comprehensive factual approach, clear writing, and useful information, the paternalism and bias that permeates the entire book can be quite frustrating.

The first indication of a problem in the book comes in the dedication.

This book is dedicated to the professionals who devote their careers to ameliorating drug problems and to the families and friends of those suffering with addiction. We meet an amazing variety of people in the course of our work. Naturally this includes police on the beat, teachers in the classroom, and treatment counselors in the clinic, but also clergy who open their sanctuaries to troubled youth, neuroscientists trying to invent vaccines against drug abuse, community leaders who—armed with nothing but the courage of their convictions—confront violent street dealers, and many more. They are as diverse a cross-section of society as one could imagine, yet almost to a person they share a passion and willingness to go beyond. Hats off to you all; you make the world a better place, and for that we thank you.

Diverse? No. There are many lenses through which you can view the issues related to drugs and drug policy, but while the tragedy of drug addiction is an important one, it is only one of many. Unfortunately for these authors, it appears to be the only one.

This doesn’t mean that their presentation of the facts are one-sided. Not at all — there’s a very careful effort to include everything. It’s more how the conclusions are shaded.

For example, in the midst of an exhaustive beginning discussing toxicity, addiction, dependency, disease, etc., there’s this telling little passage:

Why is drug use a problem?

Often it isn’t a problem. Most people who use abusable drugs—even most people who use them nonmedically—do so in a reasonably controlled fashion and without much harm to themselves or anyone else. Most people who smoke cigarettes have a hard-to-break habit that damages their health, but that makes cigarette smoking unusual. In this regard, most drugs resemble alcohol, with many occasional users, fewer heavy users, and fewer still who remain heavy users for years on end.

If abusable psychoactives can be used safely, where does the problem come in?

That something can be done safely does not mean it always will be done safely. Five times out of six, playing Russian roulette has no bad consequences.

Wow. Comparing casual drug use to Russian roulette? That’s a ridiculous analogy intended to make casual drug use look like some extraordinarily deadly activity followed by people who are suicidal.

The authors do touch on the positive aspects of drug use, although tellingly, that doesn’t show up until chapter 7. And even then, it’s shaded by bias.

At one point, for example, they address whether “drug taking [can] enhance the appreciation of music and the visual arts.” While they made a rather tongue-in-cheek suggestion that more research was needed in this area (something I’d agree with), their prime example had do to with how alcohol encourages singing:

Now, how can you possibly address drug use and the arts and use that example, while completely ignoring the powerful connection between cannabis and jazz?

The authors spent very little time discussing the drug policy reform movement. Someone, however, couldn’t seem to resist a bit of a dig in this rather nonsensical passage (complete with “scare quotes”) that appeared almost out of nowhere:

The “drug-policy reform” community—which may include a lower-than-average proportion of people who do serious strength training—is more insistent about the freedom to take cannabis for fun than the freedom to take anabolic steroids to build muscle mass.

Most of the book has good information, and their critiques of bad policy are powerful and to the point. They detail the failures of D.A.R.E., and lament the politicization of drug policy science. They clearly understand, and go to great lengths to point out, that prohibition causes a host of serious problems, and that we can’t simply point to the dangers of drugs without realizing the effect of policy:

As a result, those who want to use evaluations of the risks of specific drugs—including the risk of addiction—to make policy also confront the fact that policies shape the risks. [emphasis added]

So, how did they address legalization as an option? Here was one interesting passage that came after a discussion of the damage caused by drug-abuse control policies.

Then wouldn’t it be possible to have no coercive drug-abuse control policies at all?

It would be possible to create a world in which drug taking and drug selling were both freely practiced and in which the state’s only concerns with drug abuse were:

Not bad. Let’s call it legalization. They can certainly imagine it. They just can’t accept it. Take a look at their reasoning for not going to that better place.

Wouldn’t the results of such a “no coercion” policy be an improvement on the current mess?

It might. Or, then again, it might not. And what is “better” depends on judgments about the relative importance of different kinds of harm and benefit as well as estimates of the likely results of alternative policies. The plausibility of moving to a no-coercion drug policy depends on how much drug abuse current policies actually prevent. For example, how many more cocaine abusers would there be in a world of free trade in cocaine? Alas, there’s no way of finding out except for trying a new set of policies; quantitative estimates about a hypothetical world so different from the one we can actually observe are little better than guesses. [...]

…the right comparison is between the drug abuse problem as it would be under some alternative policy and the combined damage from drug abuse and the illicit markets under current policy.

OK, I’m willing to accept that as the goal. But they won’t let us use it because we can’t know for certain what the answer is without trying legalization.

If the results of legalization are uncertain, why not just try it out, and go back to the current system if legalization doesn’t work?

As Humpty Dumpty discovered the hard way, not every experiment is reversible.

So, the current system is bad, legalization may well be much better, but we can’t know for sure without trying it, and we can’t try it because we might not be able to reverse it, so we’re left with a bad system.

And when it comes to the conclusion, while the authors provide three separate lists of possible “what is to be done” options (“consensus” list, “pragmatist” list and “political-bridge-too-far” list) legalization appears nowhere.

There are many places throughout the book where the authors’ fear of addiction is so powerful that it affects their ability to dispassionately view their own facts. The notion, for example, that all illicit drugs would necessarily follow the same use/abuse prevalence of currently legal drugs (ie, that cocaine use/addiction would reach the levels of alcohol use/addiction). They also show a fear of the free market (that greedy businesses would do everything they can to addict as many people as possible under any legal system), and an unwillingness to imagine alternative means of legalization.

They point out the success of heroin maintenance programs in Europe, and seem to understand that tobacco harms have been reduced without criminalization, yet can somehow only imagine a highly-advertised, malicious-intent, business-profit-driven drug market under legalization.

Check out this passage:

How much of the increase in consumption after legalization would reflect increased problem use rather than increased casual use?

Almost all of it. The volume of drug consumption doesn’t depend very strongly on the total number of users. What’s crucial is the number of heavy users. One ten-drink-a-day drinker (and there are such people) is more important to the alcoholic beverage industry than fifty people who have a drink a week. So increased total drug consumption is almost always the result of increased problem drug consumption.

What a ridiculous statement! They’re taking the fact that problem users normally consume the largest quantity of drugs as a way of implying that legalization would result in more problem use than casual use. Under their reasoning, if legalization results in 10 new casual users and one new problem user, but the problem user consumes 20 times as much as a single casual user, then problem use has increased by double the amount of casual use. And that’s just an intellectually dishonest statement.

It also ignores the fact that prohibition is more likely to deter the casual user than the problem user, so legalization would result in far more of an increase in casual use (a fact that has been borne out in decriminalization models).

But then, remember that the authors think that casual use is like Russian roulette.

For the authors, it boils down to a massive fear of addiction, along with a fondness for the nanny state and a strong paternalistic (if not authoritarian) political world-view.

They don’t hide their paternalistic preferences.

If people choose to harm themselves with drugs, why is that anyone else’s business?

This question reflects the central argument against any sort of paternalistic intervention in private behavior. It is subject to at least three substantive answers; how persuasive they seem will vary from case to case depending on the facts, and from reader to reader depending on differing values. First, by some reckonings, self-damage to a human being is still damage, and if it can be prevented at reasonable cost—including some restrictions on the freedom to engage in self-damaging behavior, as in Mill’s bridge example—that’s a good enough reason to interfere.

That’s right – loss of freedom is acceptable if it might mean that we can prevent someone from hurting themselves. The really sad part is that they’re willing to give away the freedom of others (those who are hurting nobody including themselves) in a futile effort to prevent self-abuse.

Again, it’s important to point out that this book contains a wealth of useful information. The authors have done their research and know their facts.

But their inability to see past their massive bias, their paternalistic view toward other citizens, their lack of interest in basic principles of liberty and human rights, and their unwillingness to seriously consider a valid alternative policy, makes the book fatally flawed.

While reading the book, I had the image of birds sitting in a cage, distressed by the rusty bars and the dirty cage lining harboring disease that has been killing some of the birds. One of the birds notes that the cage door isn’t locked, but the others say “You can’t go out there! We don’t know what’s out there.” and they continue to discuss ways to make the bars look nicer.

“Drugs and Drug Policy: What Everyone Needs to Know” Yep. It’s all there. Everything you need to know, including the fact that legalization is the only viable option. Too bad the authors can’t see the inescapable conclusion of their own book.