Back in a 1999 Congressional hearing on drug policy in Washington, DC, here’s what some of our representatives, sworn to defend the Constitution of the United States of America, had to say:

“Legalization is a surrender to despair,” said Rep. Benjamin A. Gilman, Republican of upstate New York. “It cannot and ought not be any topic of serious discussion in our nation’s debate of the challenges of illicit drugs.”

Suggesting the depth of hostility toward the notion of legal drugs, Rep. Bob Barr, R-Ga., asked whether anti-racketeering laws could be used to prosecute people conspiring to legalize drugs.

For decades, drug policy activists have faced this kind of extreme, government-led opposition to the core principles of our country.

It’s no wonder, then, that so many people today are unable to even discern the Grand-Canyon-sized gap between:

The second is not only legal, but part of our responsibility as citizens.

It’s sad to see how often this occurs, particularly in business services such as advertising policy.

Now, private businesses absolutely have the right to set and follow their own policies and choose what advertising they wish to accept. A savvy business sets such policies with care to insure maximum advertising revenue while not alienating large segments of the population.

But too many are unable to distinguish between drug abuse and drug policy.

Chelsea Green Publishing decided to run some ads for the book they published: Marijuana Is Safer: So Why are we Driving People to Drink?. Facebook rejected the ads. 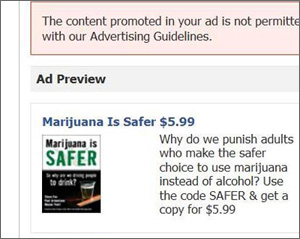 “I took a look at your account and noticed that the content advertised by this ad is prohibited. We reserve the right to determine what advertising we accept, and we may choose to not accept ads containing or relating to certain products or services. We do not allow ads for marijuana and any products related to it, and will not allow the creation of any further Facebook Ads for this product. We appreciate your cooperation with this policy.”

Note the incoherent conflation of ads for selling marijuana with an ad for a book about marijuana policy.

There’s a huge difference, and we can see it, but as a society we have become conditioned to accept that advocating legalization is, in fact, illegal.

I am absolutely certain that an ad for a book titled: “Marijuana: the demon drug that rots your brain” would have been deemed perfectly acceptable to the robots (ie, minimum wage humans) who were staffing the rejection post.

Fortunately, this story has a happy ending. The issue got the attention of someone higher up in Facebook – someone with a brain, and they stepped in to overrule the censors.

”We would like to sincerely apologize for the situation that occurred with your experience with our system yesterday. After further investigation into the ads that were submitted and disapproved, our policy team determined that the ads for your book were acceptable to run on the site…Again, we want to apologize for any frustration this situation has caused. Please feel free to let me know if you have any questions regarding this situation and I’ll be happy to help out.”

This is very nice to see. It’s also exceedingly rare.

I had my own run-in recently with the inability to distinguish between illegal drugs and drug policy advocacy.

For awhile I tried using Ad-Brite for banner ads on this site. One of the advantages of Ad-Brite was the fact that, in addition to the standard ad rotation, people could specifically purchase ads to run on DrugWarRant.com — and I wanted to allow that possibility.

After a number of months of running Ad-Brite, I was extremely disappointed with the results – essentially no revenue at all. So I decided to tinker with the placement of the ads and submitted a change of location on the page.

I got this notice:

We’ve completed the review of your zone, Right Banner Bottom ( Zone ID #1902676 ), that you’ve submitted. Unfortunately, we are unable to approve it for our marketplace at this time due to the following reasons:

If you wish to petition our decision or you have changed your site’s content to meet our standards, please forward this email to support@adbrite.com with a request to have your zone re-reviewed.

Since I was already fed up with their service and found no reason to keep using it, I decided to write them and tell them what I really thought…

Are you kidding me?

Drug WarRant.com is a political activism site. It is a site about
stopping the bigoted narrow-mindedness of ignorant people who think talking about fixing the laws is somehow the same as advocating breaking them.

It is because of such short-sighted viewpoints that we have thousands of deaths in Mexico from the drug war, shootouts in our streets, and young children using drugs (because we have no regulation of them). It’s about the way the drug war corrupts law enforcement and our Fourth Amendment rights. It’s about comparisons with failed Prohibition 1 that resulted in Al Capone. It’s about finding ways to make our children safer.

We are facing a crisis in this country, but some idiots see the word “marijuana” and can only giggle and say “drugs are bad, mm-kay?”

This knee-jerk and simplistic reaction to my site is symptomatic of the problem.

The ironic thing is that the site hasn’t changed at all since Ad-Brite approved my ad months ago. I was merely re-configuring the ad in an attempt to see if I could actually get Ad-Brite to perform, since I’ve been extremely disappointed with the results so far.

The loss of Ad-Brite doesn’t affect Drug WarRant at all (unfortunately), but I am protesting the decision on principle because it doesn’t, in fact violate the Publisher Acceptable Use Policy in any way (there are no illegal activities, nor is there promotion of drugs), and because it bothers me when I find people who don’t know the difference between political activism and promoting drugs.

Hey, at least it made me feel good, right?

Here was their response:

Thank you for contacting us.

Unfortunately we are not able to approve sites like yours in our exchange. Advertisers do not want their ads placed on controversial political discussion sites and as a result we are no longer allowing these types of sites in our exchange.

Thank you in advance for your cooperation.

If you have any questions or concerns please feel free to contact us.

No, it’s clear that the problem they had was with political discussion sites as relates to drug policy reform.

Again, it’s important to note that I support these companies’ legal right to refuse to serve me. I do find it extremely stupid, however. And a sad commentary on the range of acceptable political discussion in this country.